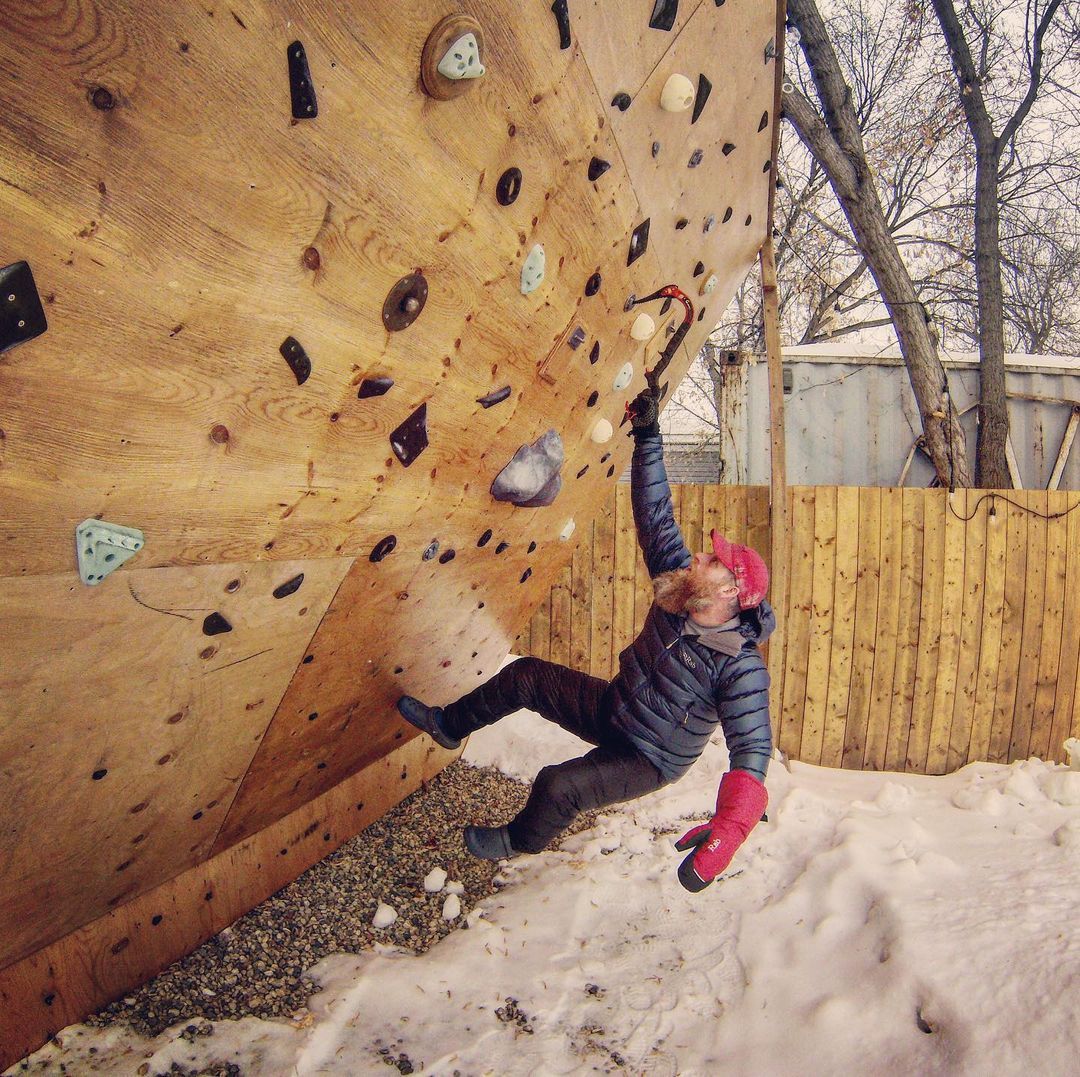 Last Thursday I was able to sneak into the climbing gym well the grew was setting and fight my way up three easy auto belay routes. My hand is still along way from recovery but it’s not going to stop me from the joys of climbing!

I can’t use my left hand to hold an ice tool yet but that’s no excuse not to train. -20c, only one good limb, and the only shoes my broken foot will fit in are winter crocs, so what are your excuses for not training?
.
.
.
.
.
.
.
.
.
.
.
#grivel #eachtotheirown #rabusa #wearerab #tasc #tascperformance #tascperformanceambassador #mixedclimbing
https://www.instagram.com/p/CK4UTzKD1i6/?igshid=142nfrws4pr5x 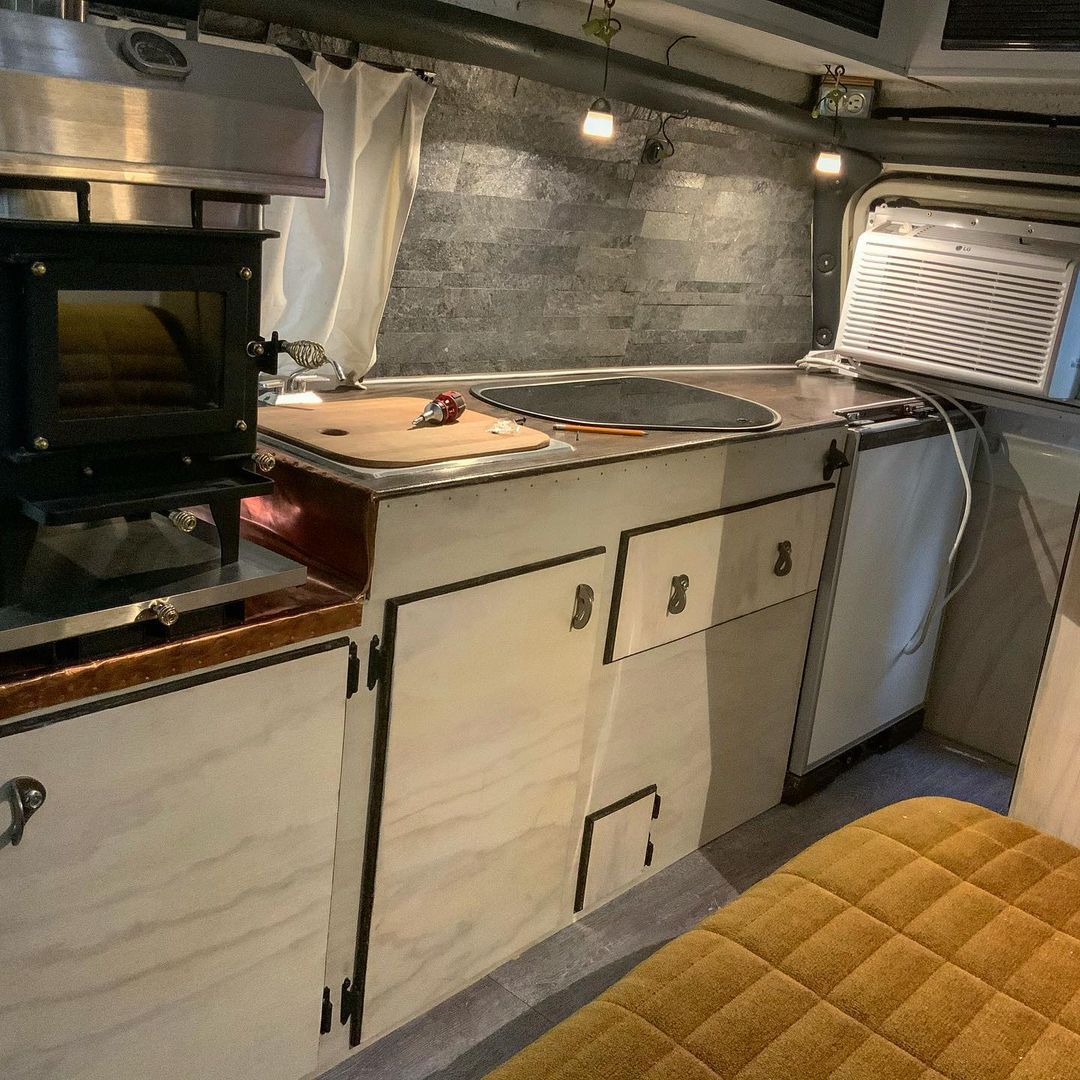 Well getting close to the end of the van build posts. It took me 5 months to build out the van and a great deal of that time was spent waiting on parts during shutdown.

After living in vehicles for so many years I have learned keeping things simple and easily repairable is important in van life. I have seen some amazing van builds that look more like a work of art then a home. A lot of the new van builds use a lot of wood planks and hard woods which adds a ton of weight which cuts in to gas mileage. So I chose to use a nice cabinet plywood for wall panels and cabinets. I white washed and sealed all the wood to make for easy clean up from every day spills. For cabinet hardware I used old bolt hangers recycled form rebolting projects.

Having a work space and a place to eat on bad weather days required a simple table. But this is the one time in the build I used a heavy peace of wood but I think it was well worth it.

I finally got around to doing something about that hideous coloured couch / futon. I’m not sure if this is my final solution. Buying a simple cover made a huge difference. The big benefits are the cost and the biggest selling point for me was the ability to take it off and wash it easily. I’m still thinking of recovering the the couch but still debating that. 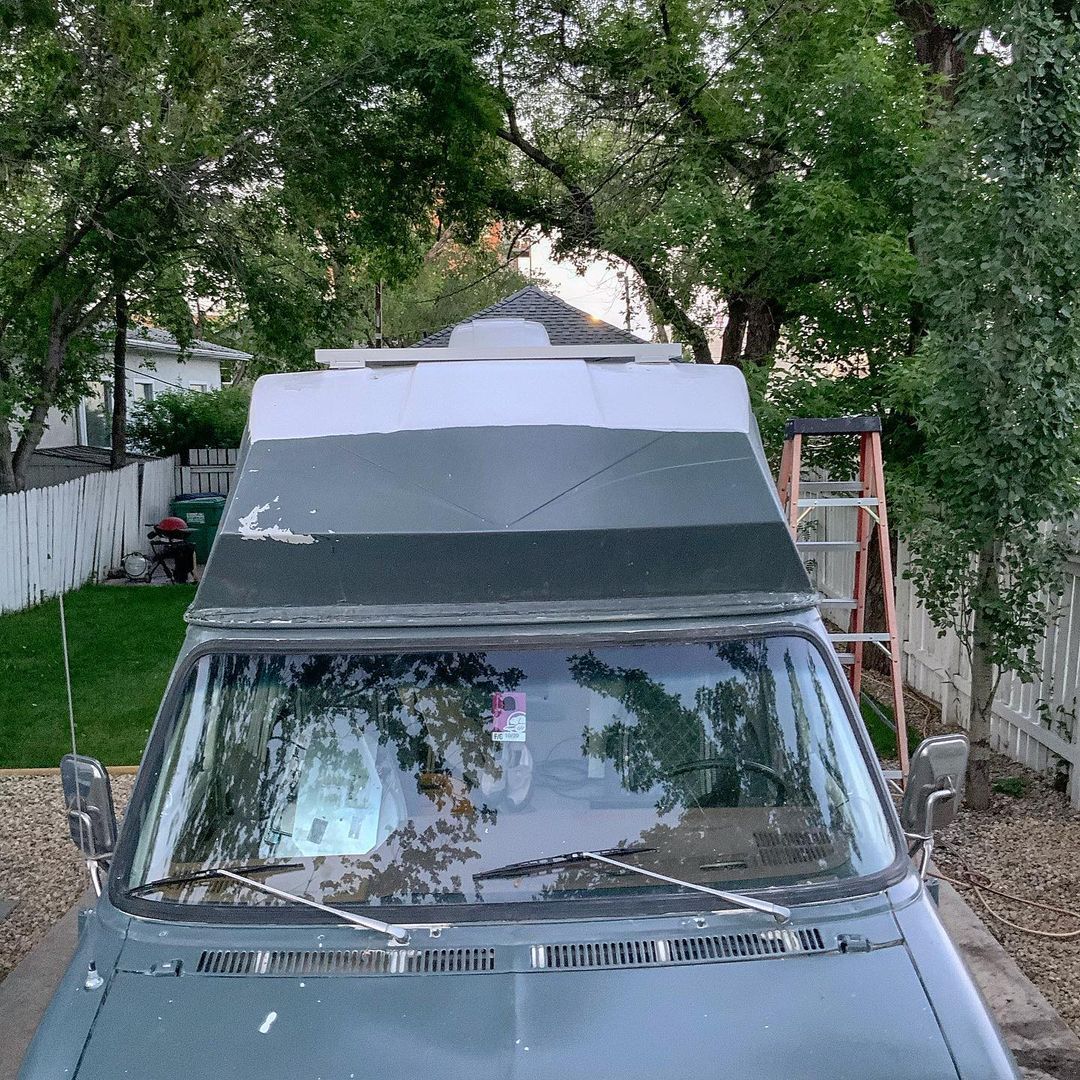 This van post may not be that exciting for some but it was a huge improvement to the van. Refinishing the roof and installing solar panels.

Laying out where the solar panels would be installed I pressure washed the roof but it hardly made a dent in the crud growing on it. So I sanded down spots to fibreglass on mounts for the solar panels. Had to take into account of the chimney that I had not yet installed.

Then the real fun began, scrubbing the roof with a wire brush and pressure washing over a whole week. Once in was crud free I was able to refinish the roof with a RV fibreglass roofing sealant. It will help keep the roof cooler in the summers and protect and seal the fibreglass. 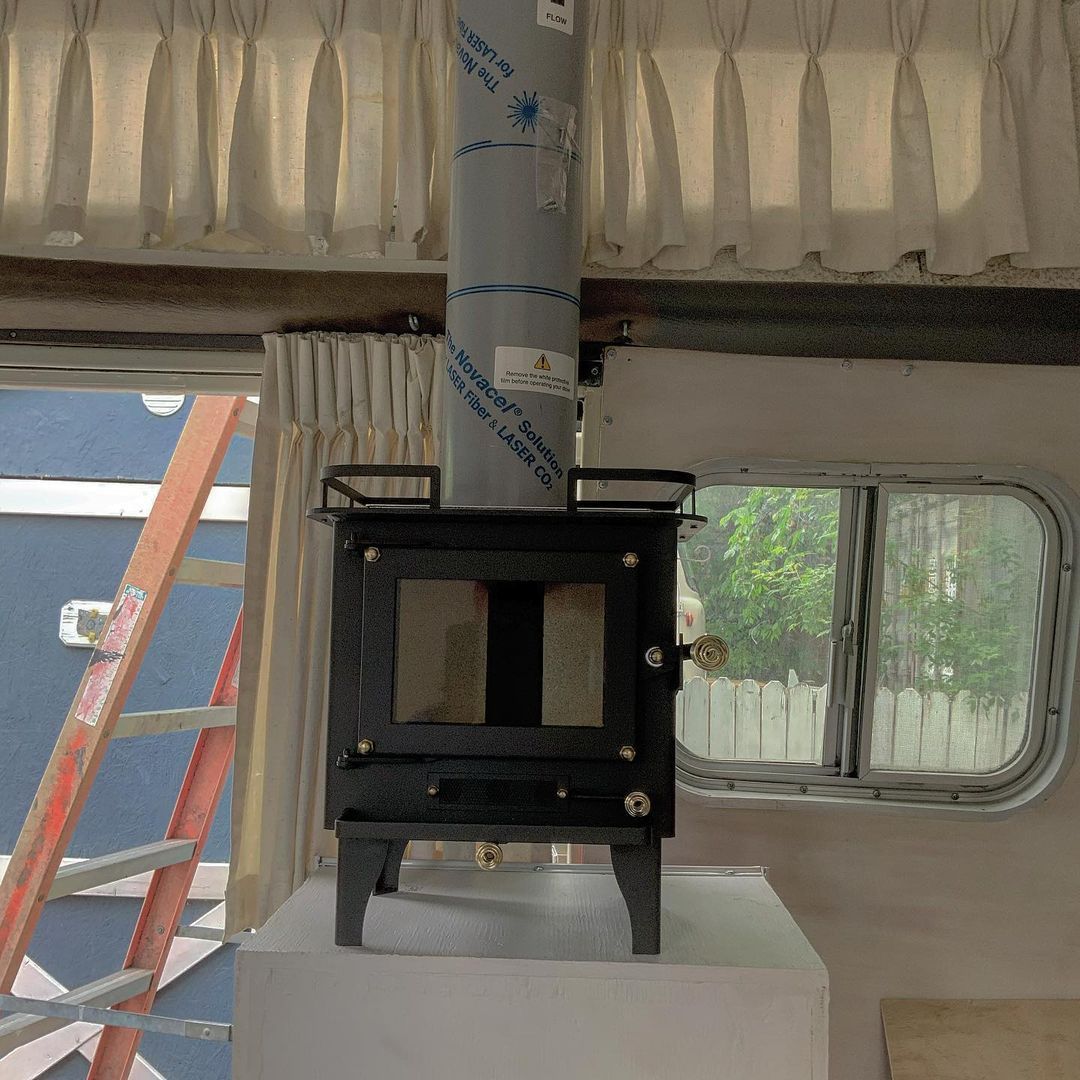 Let there be heat!

After a living though a winter in the bus chasing ice I learned that having reliable consistent heat in the coldest part of winter was a must.

The only thing I found that would work well was a woodstove. So like the bus I decided to upgrade the heating system in the van to wood heat. The propane heater that was in the van actually ended up weighing more than this new woodstove by @cubicminiwoodstoves .

Of course the hardest part about installing a woodstove was finding the clearances needed to keep it safe. I had to manufacture a custom bracket to hold a heat reflecting shield that only required 1 inch clearance.

I spent days second-guessing everything and re-measuring again and again in order to get the installation safe and secure. The most nerve-wracking part of the installation was having to cut a hole through the roof!

In addition I opted to order the stove insert for the top of the wood stove so those of you who are still expecting to stop by for fresh chocolate chip cookies after a long day of ice climbing they’ll be here waiting for you! 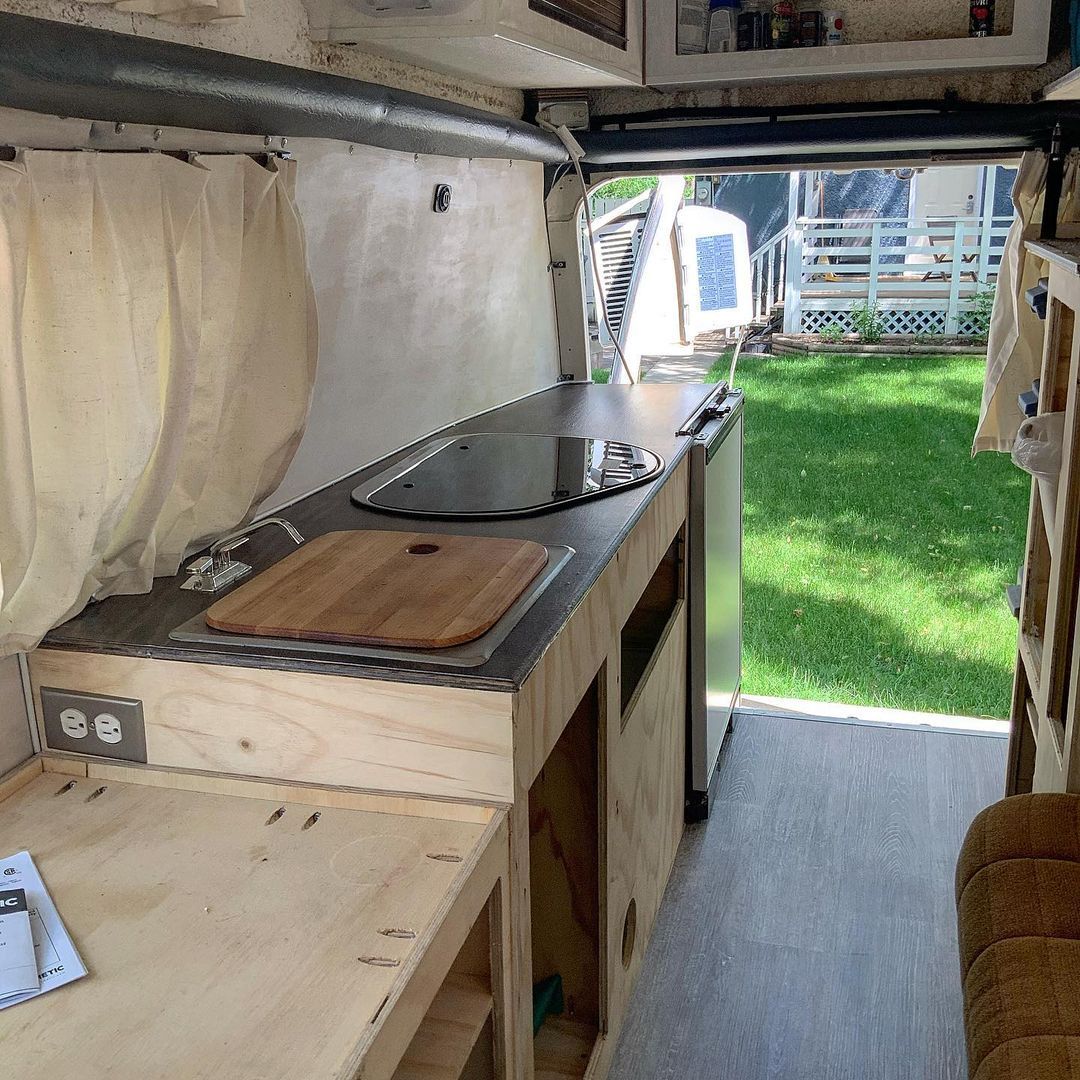 Today’s van post covers some of the finishing touches of the kitchen cabinets.

Replaced all the propane lines in the van with new lines and added a quick disconnect outside to hook up a bbq.

Looking back into the van you can see the gold 1970’s futon. Don’t worry I did deal with that. Also I was planning on redoing the curtains but not sure I can sew one handed.

Lighting is one of the most important design considerations when building a camper van. I used @goalzero Light-A-Life mini USB lights in my bus build and loved them. So they were my first choice to improve the lighting over the kitchen counter and they ended up working perfect!

The end of the countertop got a little pizzazz with a sheet of copper being moulded in place for what is about be set on in! Wait till next post to see.

Last part of the kitchen counter was to add a back splash. I found thin cut limestone I glued on the wall. It was light weight, easy to install and made a huge difference to the look of the whole van!
.
.
.
.
.
.
.
.
.
.
.
.
.
.
#wearerab #grivel #noplacetoofar #tasc #tasclife #tascperformance #tascperformanceambassador #vanlife #vanlifemovement #vanlifediaries #vanlifers
https://www.instagram.com/p/CIdfKz0DYMF/?igshid=4puc14tvr9jy 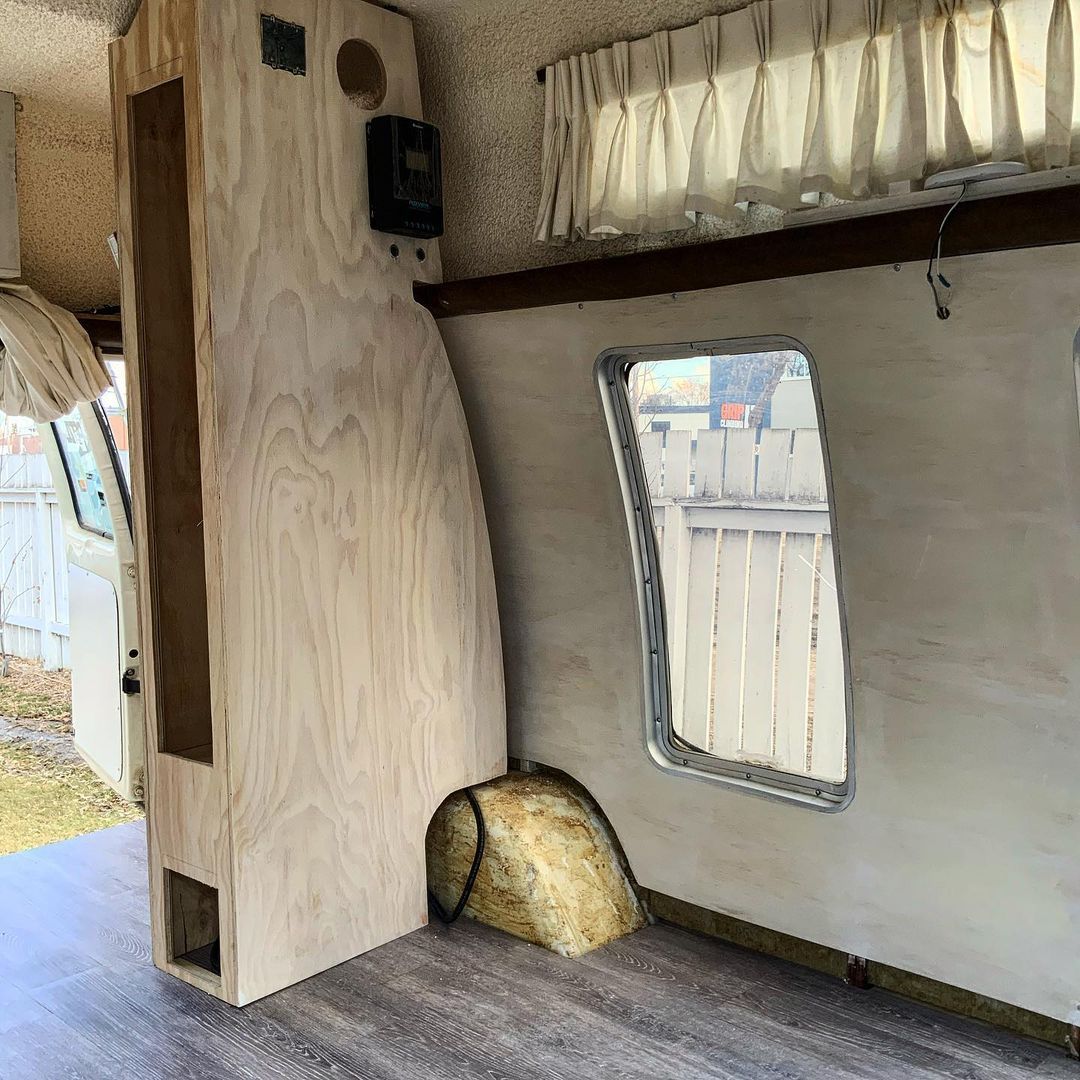 So today we continue with the camper van rebuild series of posts.

We’re up to two parts of the build that took the greatest part of my time and sanity on this build. Cabinet and electrical. I’m very confident with the electrical side but I am no cabinet maker so it took great deal of time to build the cabinets.

I wanted really focus on get the electrical 100% and future proof if I ever wanted to upgrade components. I spent the extra money on higher marine grade electrical components and wiring. Which made up a considerable amount of my budget for the van rebuild. Solar panels and a shore power battery charging system installed. 12 volt and 110 volt wiring was installed throughout the van.

With the electrical installed it was time to deal with the rest of the cabinets. Again this is something that is not my strongest skill set. So I took a considerable amount of time to measure, remeasure and measure again before plotting out the best solution for the build. Even though it took a considerable amount of time I was happy with the outcome of the cabinets.

The countertop ended up being a very simple sheet of plywood. For a couple of reasons one I needed the clearance in the back corner of the van where the air conditioning meets the counter top. But after living in vehicles for many years I realize the abuse that counters take. So putting in an expensive butcher block or live edge counter would only add to the considerable amount of weight and cost to the build. I tried to reuse anything that was in good shape in the van and that included the sink. It was in great shape and there’s no reason to spend the money to replace it. The stove top was another issue the old one just needed to be replaced. So luckily I was able to find a new replacement stove top with a glass top which will increase counter space. It was incredibly difficult to locate one for during this pandemic it seems everybody was building vans out! I’m loving the new counter space and find a very functional.
.
.
.
.
.
.
.
.
.
#vanlife #vanlifediaries #vanlifemovement #vanlifestyle #tasc #tasclife #tascperformance #tascperformanceambassador #grivel #noplacetoofar #rabusa #wearerab